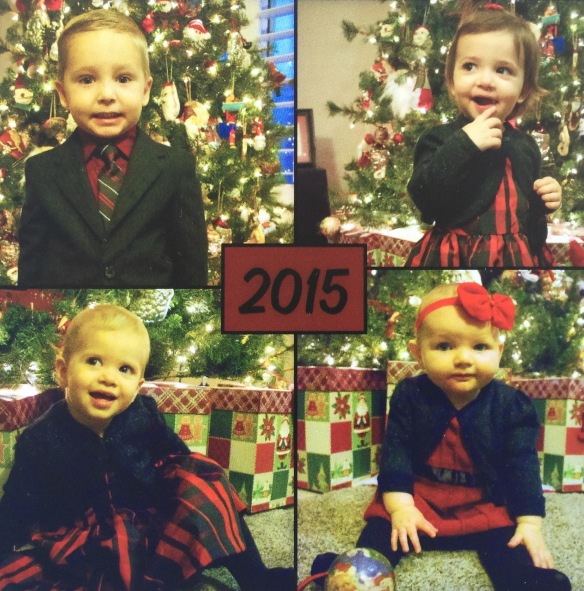 Here we are again scrambling to get our card and this update out to all of you, hopefully before Christmas! We want you all to know how much you mean to us, not only this time of year, but always! Here is a recap of this past year for the Brough family:

Caleb returned home from his mission for The Church of Jesus Christ of Latter-day Saints in July. He served in the Vanuatu Port Vila Mission and in March, category five Cyclone Pam hit Vanuatu. There was devastating damage to the island of Tanna (where he had served previously) and significant damage to the island of Efate where he was serving at the time of the cyclone. Fortunately there were not very many deaths but there was a lot of rebuilding to do, which he and the other missionaries were able to help with for several weeks. After the cyclone all the missionaries that were serving on the island of Tanna were brought back to Efate but that caused a lack of housing for the missionaries so it was decided that most of the missionaries that were due to go home within the next few months would be reassigned to missions in their home countries. Caleb was reassigned to finish the last three months of his mission in the Hawaii Honolulu Mission. It was heartbreaking for him to abruptly have to leave Vanuatu and the people he had grown to love so much, especially at such a devastating time for them but he ended up enjoying his experience in Hawaii where he actually served in a couple of Samoan wards in the Honolulu area. At the end of July, Don and Nancy took him back to Vanuatu VIA Fiji for our last “post mission” trip. We’ve loved visiting all of our boys’ missions but we would have to say that this was by far the most eye opening, adventurous one of all! We fell in love with the beautiful and sweet people and their amazing hospitality.   For a few days we even stayed in an authentic village with Caleb’s Ni-Van (native people of Vanuatu) “family” on the island of Malakula. We also visited the islands of Santo, Tanna and the main island of Efate. While on Tanna we got to be up close and personal with an erupting volcano, Mt. Yasir!  We could see some of the damage from the cyclone but for the most part they had recovered and rebuilt by the time we went which was only a little over four months later. However, they have been in a drought ever since the cyclone and can still use prayers! Caleb is now living in Provo, Utah and working at Frontier Financial and is recently engaged to Mollie McCurdy, a darling girl who he has known since junior high. Mollie is attending BYU and majoring in Communications Disorders. We are all looking forward to their wedding in May!

Dalton continues to work full time at Pay Pal and attends school full time at Chandler Gilbert Community College and Rio Salado College. He will be transferring to Arizona State University next fall to major in Industrial and Organizational Psychology. He loves the young single adult ward he attends and keeps busy with his calling in the Elders Quorum. He went to Victoria and Vancouver, Canada in June for one of his mission companion’s wedding and loved it there.  He joined the East Valley Millennial Choir Organization because he said he missed singing in a choir. They put on an amazing concert at the beginning of December. We love having Dalton living at home with us although he isn’t home a lot!

Landon and Ashlin blessed us with a new granddaughter, Dora Capri (bottom right), in May, who has delighted us all. We surprised Caleb with her at the airport when he returned home from his mission. He knew that he would be getting to meet his other two nieces who were born while he was gone but we never even told him that Ashlin was pregnant or that Dora was born six weeks before he came home!   Landon and Ashlin live in a condo in another ward in our stake with Dora’s feline siblings, Ruben and Maple. Dora loves her kitties! Ashlin’s dad opened a new veterinarian hospital and Pet Depot in October at which time Landon quit his job at Pay Pal and is now employed in the family business. This will be great training, as he will be applying to vet school in the near future. He just finished another semester at Arizona State University. Ashlin enjoys being a stay at home mom and is also fortunate to be able to work from home for Fast Track Legal. She is the oldest of six children, and her youngest sibling is only six, so she is a natural at being a mom to little Dora.  Landon serves in the Young Men organization and Ashlin serves in Primary.

Zach and Tara keep busy with their little family. Porter (top left) is three and goes to pre-school two times a week. He loves robots and garbage trucks. Piper (top right) will be two in March and enjoys being entertained by Porter and loves to line up her toys. Zach continues to work as an engineer at Burns and McDonnell in Phoenix. He travels quite often to California on business. He took the GMAT this year and is now starting the application process for graduate school. So who knows where they will be this time next year. Zach ran the Phoenix half marathon in February. Zach enjoys his calling in the Young Men’s organization and Tara is an Activity Days leader and was also involved with their stake’s Young Women’s Camp last summer. Tara is a fun stay at home mom. She also teaches voice lessons and enjoys the world of mommy blogging!

Jordan and Casey are also busy with work and being parents to Lindy (bottom left), who will be two in April. Jordan’s new schedule at GoDaddy also allowed him to be a part time swim coach at Gilbert Classical Academy in the fall, which he really enjoys. Casey continues to cut hair at Blossom Salon and Boutique and is the sweetest mom to Lindy. Jordan is a ward missionary and Casey has recently been called to serve in the Relief Society. In July, when we were gathered at the house on Caleb’s homecoming weekend, Jordan, Casey and Lindy came into the house and Lindy handed Nana a paper which was actually an ultrasound picture of her sibling due to be born in January! They later found out that it will be a little sister for Lindy! We are all so excited for her arrival at the beginning of 2016!

Don and Nancy love being grandparents and almost empty nesters!! Don has worked for Wells Fargo for almost 33 years now of which we are very grateful. He didn’t have to travel on business as much this year as he has in the past. He did travel to Charlotte, NC and while there also visited a facility in Columbia, SC where he was able to visit Nancy’s niece. Nancy did get to go to San Francisco with him in July on one of his few trips there. Don and the boys are Arizona Diamondback fans and we all enjoyed another year of taking turns getting to go to their home games a couple times a week.   Both Don and Nancy had a few health “events” this past year. Don had his gall bladder removed about a year ago and Nancy recently had her thyroid removed. We can’t complain, though, because we have both enjoyed over 50 years of life without having to be on any medication. Now we are getting used to our new normal of getting old, dang it!  We both work out at a local gym four to five times a week. Hopefully the upcoming nuptials of Caleb and Mollie in May, will be incentive for us to get in shape! Due to our almost three week trip to Vanuatu and Nancy’s surgery, she quit her volunteer temple shift in the baptistry, which she had done for over five years. She misses it but still enjoys attending the temple once a week and hopes to be a temple worker again in the future. We enjoyed having extended family visit when Caleb returned from his mission and also went on several road trips to Utah to visit Don’s parents and brother in St. George, Don’s sister in West Jordan, Nancy’s Dad in Lehi and Caleb in Provo. Don keeps really busy with his calling as the stake executive secretary. Nancy was released a year ago after serving three years in the Relief Society. She was then called as the ward camp director and had a fun time with the young women in our ward in early June at a three day “glamping” retreat. She was recently called to assist with our stake’s girls camp next summer and will also be teaching the eight and nine year olds in Primary starting next year. Don and Nancy are on Facebook but are only “friends” with family members and currently serving missionaries. We are also on Instagram (herdofbroughalo), though, and our account is private but if any of you request to follow us we will accept. However, you need to be warned that Nancy is known to severely “overpost” especially when we go on a trip. Good friends have even unfollowed us because of this!

We are so grateful for our associations with all of you. We are especially grateful for this time of year as we celebrate the birth of our Savior, Jesus Christ. We wish you all a very Merry Christmas and a Happy New Year!